A “marriage” is “the union of a man and a woman to the exclusion of all others, voluntarily entered into for life.” In light of this definition, then, there are 4 requirements for a valid marriage:

In general, the legal age for marriage in Australia is 18. Minors can also get married, but they must first receive authorisation from a judge or magistrate. There are two requirements that must be met before a judge or marriage will authorise a minor to marry:

Some of the other requirements that must be met in order for a marriage to be valid include:

A marriage may be consummated overseas in accordance with Australian laws. Doing so requires that the parties are married either by, or in the presence of, a defence force Chaplin, and at least one of the parties must be a member of the defence force.

Overseas Marriages Consummated Under the Law of the Relevant Jurisdiction

Overseas marriages consumated in accordance with local laws are valid in Australia, subject to certain exceptions. For instance, same-sex marriages or unions entered into overseas are not marriages for the purpose of Australian law. This is so even when the marriage in question complies with the law of the relevant jurisdiction.

Historically, obtaining a decree of dissolution of marriage required that at least one of the parties to engage in morally blameworthy conduct. This changed in 1976 with the enactment of the Family Law Act. As a result, there is now only one ground for divorce: i.e., the irretrievable breakdown of the parties’ marriage. This occurs when the parties to a marriage have been separated for a period of at least 12 months.

Australia is somewhat unique in relation to most other jurisdictions in its treatment of divorce. Divorce applications are separate from applications for property, maintenance or parenting orders. This is why separated couples may apply for divorce orders several years after resolving their other family law issues.

Despite their apparent simplicity, divorce applications can be complicated by the following factors: 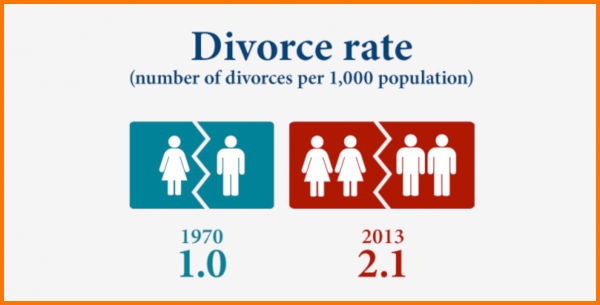 The Meaning of “Separation”

Parties seeking to divorce must show the court that they have separated for a period of not less than 12 months from the date of filing the divorce application. For the purpose of meeting this requirement, “separation” is more than mere physical separation. That is, the parties must demonstrate that their martial relationship no longer exists. Some of the factors that assist judicial officers in determining whether a martial relationship exists include:

For a judicial officer to find that the parties have separated, there must be sufficient evidence of:

Proof of separation does not require both parties to have reached an understanding that their relationship has ended. Separation may occur on account of the actions and intentions of only one of the parties to a marriage:s 49(1) of the Family Law Act. Difficulties can arise, however, when the applicant fails to communicate their intention, either through words or conduct, to the respondent.

Separation Under One Roof

It is possible to satisfy a judicial officer that the parties have separated even though they may still live in the same household. However, the Full Court in Pavey held that separation under one roof suggests: “an inherent unlikelihood that the marriage has broken down for the common residence suggests continuing cohabitation.”

Resuming Cohabitation After a Period of Separation

Proper Arrangements for Children Under the Age of 18

If there are children of the marriage who are under the age of 18, a divorce order will not take effect unless:

The purpose of securing proper arrangements is to ensure that the divorce under consideration is consistent the children’s best interests. Where the court cannot be satisfied that proper arrangements have been made, it may have regard to the totality of evidence in deciding whether to grant the divorce. This may occur where, for example, one of the parties is so destitute that they are incapable of providing any form of financial provision for their children. If, however, the court has reason to suspect that the there are no exceptional circumstances to justify making the order, it may adjourn the proceedings pending the preparation of a family report.

An application for divorce would ordinarily be filed along with a certified copy of the parties’ marriage certificate. If the certificate is not in English, you should obtain a translation and prepare an affidavit from an accredited translator. You may also need to file a supporting affidavit from a witness, in case you are alleging that both you and your spouse were separated under one roof. There are various requirements that must be met if the affidavit is to be accepted by a court. These requirements can be found in both within the Federal Circuit Court Rules and the Evidence Act.

Personal service is required when serving a divorce application upon the respondent. The parties and not permitted to serve documents on each other. Useful information concerning the service of divorce applications can be found in the Federal Circuit Court of Australia’s Divorce Service Kit.

It should be noted that the applicant ought to serve a copy of the brochure “Marriage, Families and Separation” upon the respondent along with their divorce application.

A divorce application may be heard in the absence of either party when there are no children of the marriage who are under the age of 18. Once the application is granted, the order will take effect 1 month from day that the court grants the order. During this period, the parties may choose toreverse the order if they have reconciled. Alternatively, a divorce order can also be reversed if there is a miscarriage of justice. A miscarriage of justice may involve fraud, perjury, withholding evidence or any other circumstance. There is no appeal from a divorce order once the 1 month period has expired.

Section 104 of the Family Law Act provides for the recognition of divorces obtained overseas. However, only an Australian divorce order will be considered in determining whether a party must obtain permission from the court under s 44(3) before proceeding with a property application: Anderson v McIntosh [2013] FamCAFC 200.

To apply for a decree of nullity, the applicant must demonstrate that:

A marriage is void on any of the following grounds:

Failure to Comply With Formalities

A person may lack the capacity to marry on account of:

A party may not have consented to a marriage because of:

LET US HELP YOU: